Robbie Williams dressing up as a skeleton and bellowing how much he wants to entertain us is perhaps the epitome of 90s frivolity. Released in 1997 in the year when New Labour broke 18 years of Tory rule, Williams’ black and white video was the airless spectacle of a Britain on the ascendant, revelling in the decadent glory of a nation in the celebratory gleam of Britpop.

But no solo artist can maintain the party monster persona that Williams flaunted in the 90s, and so it makes sense that the past two decades have seen him assume the guise of Michael Bublé-style crooner, cringe-inducing rapper and, more recently, a self-aware elder statesman of pop.

His latest album XXV and its accompanying tour marks a culmination point in the latter trajectory, marking 25 years of Williams' solo career with a handful of reworked versions from his expansive back catalogue. It’s a move that’ll induce twinges of nostalgia from anyone who remembers the heady days of Life Thru A Lens and I’ve Been Expecting You, when it was impossible to leave the house without hearing ‘Angels’ blasted through a car stereo.

If you fancy indulging Williams and his ramble down memory lane, we’ve put together this article to help you nab some tickets for his tour. Read on to find out when and where he’ll be playing, what presales are available, how much tickets will cost and much more.

When and where is Robbie Williams touring the UK?

Robbie Williams will embark on a tour of most major arenas across the UK this October. He’ll start at The O2 in London on Sunday 9 October and Monday 10 October before heading to the Resorts World Arena in Birmingham on Saturday 15 October, AO Arena in Manchester on Wednesday 19 October and Friday 21 October, and the OVO Hydro in Glasgow on Monday 24 October and Tuesday 25 October.

Here's a detailed list of all his UK dates:

When do tickets for Robbie Williams' tour go on sale?

Tickets for Robbie Williams’ tour of the UK go on sale at 9am on Friday 17 June.

Where can I buy tickets for Robbie Williams’ tour?

What presales are available for Robbie Williams’ tour?

Fans who pre-order the album from the official Robbie Williams store by 3pm on Tuesday 14 June will receive access to a special ticket presale on Wednesday 15 June.

Other presales available are: 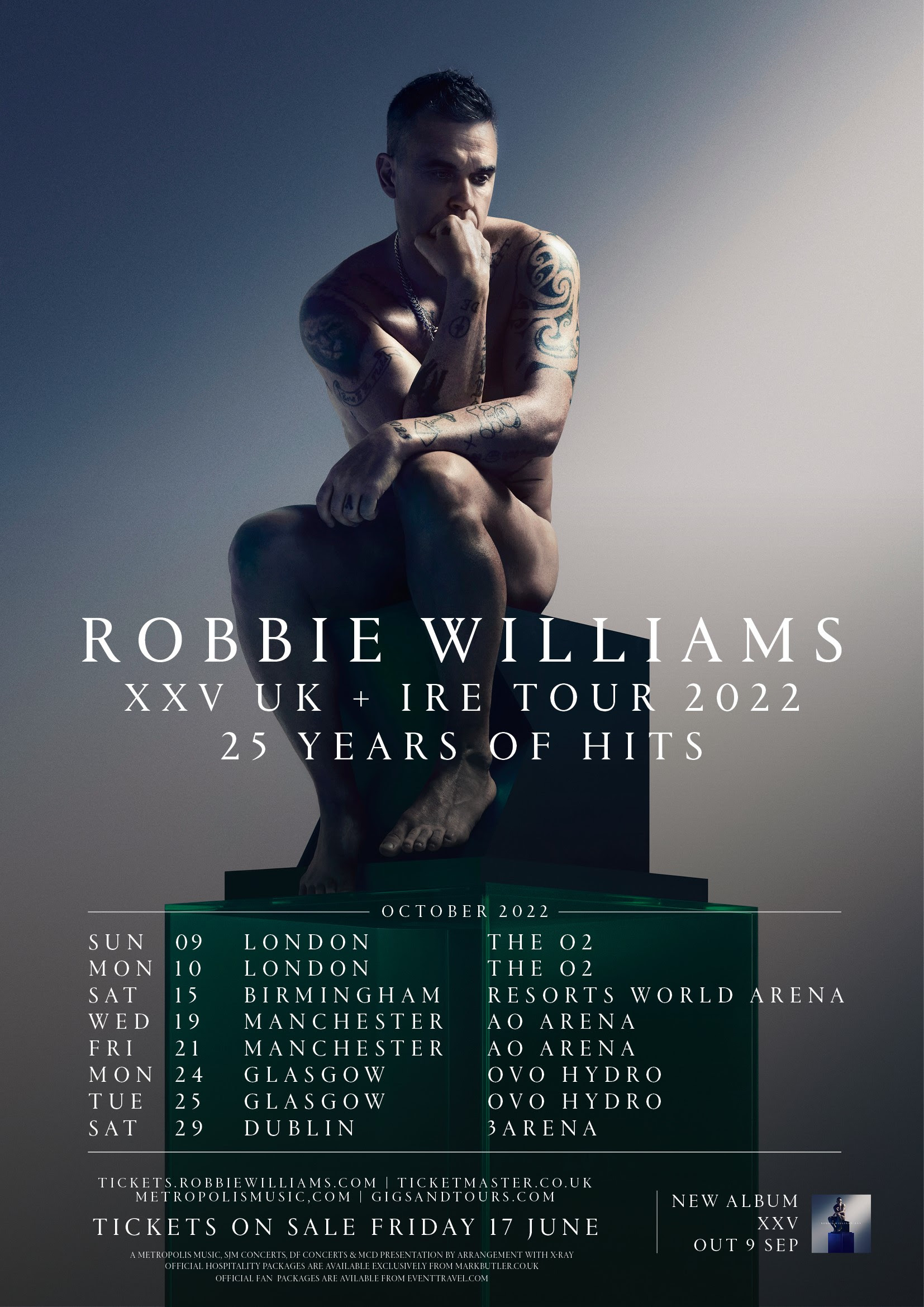 How much will tickets for Robbie Williams’ tour cost?

Tickets for Williams’ dates in London, Birmingham and Manchester will cost between £62.50 and £162.25. We don’t yet have pricing information for his shows in Glasgow, but we’ll update this section as soon as we do.

The Williams camp is yet to announce the support for the tour, but we’ll update this article as soon as we know.

What should I expect from a Robbie Williams’ gig?

Like a Lidl-branded Kanye West, Robbie Williams has always harnessed his oversized ego to create a live show that seems in awe of his raw talent. Here’s what we had to say when he played Hampden Park in 2013: ‘As the appropriately entitled 'Let Me Entertain You' belted out, Robbie's unbridled energy exploded as he ran around the stage and played up to the fans and cameras throughout. As he walked up to a secondary smaller stage, and like the clown character he often portrays, he put a pair of Scottish saltire boxers shorts on his head (thrown to him by an audience member) and outstretched his arms like a pop messiah. Returning to the main stage to a giant metal bust of himself, he posed and fooled around, as the head opened and released multi-coloured balloons.’ Read the full review here.

Is XXV any good?

Williams’ latest album XXV is set for release on Friday 9 September, but early signs signal a return to form for the UK’s favourite over-sexed lothario. After a decade of missteps in which Williams has released dodgy Christmas albums and attempted to refashion himself as an old-timey crooner, XXV sees him retreat to safe territory with reworkings of his biggest singles.

These new compositions have been undertaken with lush orchestration from the Metropole Orkest conducted by Jules Buckley, Guy Chambers and Steve Sidwell. The album will also feature four new tracks, ‘Lost’, ‘Disco Symphony’, ‘More Than This’, and ‘The World And Her Mother’. Judging by their titles alone, expect these future deep cuts to alternate between the tear-jerking ballads of ‘Angels’ and the wink-at-the-camera cringe of ‘Rudebox’ and ‘Let Me Entertain You’.

Beyond the new material, reimagined tracks on the album include ‘Millennium’, ‘Strong’, ‘No Regrets’, ‘She’s The One’, ‘Kids’, ‘Rock DJ’, ‘Feel’ and ‘Come Undone’. This is an outing unlikely to reel in new fans, but that’s not really the point. If you’ve loved Williams' past few decades away from Take That, then this is the perfect reminder of why he’s outlasted his pop-tastic peers.

Listen to his reworked version of ‘Angels’ below.

How can I guarantee that I’ll get tickets for Robbie Williams?

While there are no 100% guarantees when it comes to nabbing tickets for a high-profile act like Robbie Williams, a few of these strategies will serve you well.

First, try every presale that we’ve mentioned in this article (take a look at the ‘What presales are available for Robbie Williams’ tour?’ section).

Second, sign up to your preferred ticketing provider in advance, whether that’s Ticketmaster, See Tickets, AXS or Live Nation.

When on-sale day finally does come around, log onto your ticketing provider, enter the queue and remember not to refresh the page. Good luck, and may your Rudebox be merry.

Tickets for Robbie Williams’ tour of the UK go on sale at 9am on Friday 17 June.

Big pop hits from the sometime Take That star.